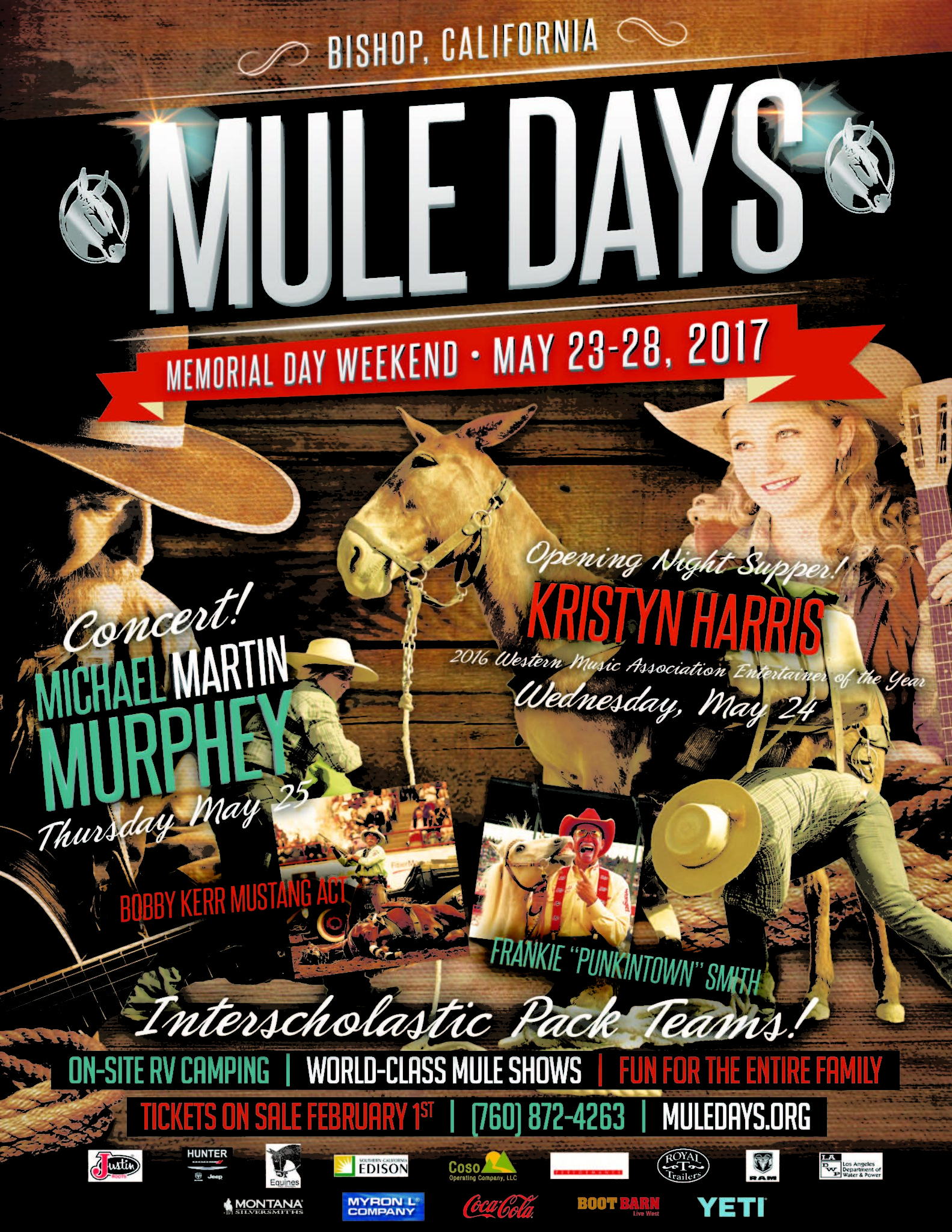 Texas-bred musical powerhouse, KRISTYN HARRIS will grace the stage of Wednesday’s Opening Night Supper. Kristyn is noted for her shimmering vocals, solid swing rhythm guitar style, unique songwriting, award winning yodel, and captivating stage presence. At 22 years, she is the youngest person in history to be awarded the Western Music Association Entertainer of the Year (2016) and only the 2nd woman to have received this honor. Her singing has been praised as “timeless” with “the warmth and power of Texas sunshine”.

Though not raised in a musical household, Kristyn began singing and playing at age 14 when she felt strongly inspired to pick up a guitar – and it has rarely left her hands since. Discovering an instant passion, she launched into a headlong pursuit of the music that grabbed her – primarily the vintage arrangements, captivating chord structures, ranching themes and uplifting melodies that cornerstone western swing and cowboy music (later, throwing in country, 1940s big band, gypsy jazz, and traditional folk song influences to her music, and building a gospel repertoire). Somewhere along the way it became her career path.

Songs of the western lifestyle have also gone hand in hand with her passion for land, livestock, and horses. Along with pursuing horsemanship, Kristyn has ventured into the cattle business via a small herd of Black Angus, and these facets of her life commonly seep their way into her songs and shows. You can still find her combining these passions, too, when she rides into rodeo arenas on her once-wild mustang to sing the “Star Spangled Banner”.

Kristyn is packaged with an energetic and genuine style that makes her love of what she does evident and contagious. Keeping a heavy and widespread tour schedule that spreads both nationally and internationally, she frequently performs as a solo act and with larger ensembles.

“With Kristyn, what you see is what you get, and what you get is an extremely talented young lady with a passion for her music and the skills to pull it off. She has a deep respect for her musical roots while contributing a fresh new voice – and she can SWING.”
–Carolyn Martin, Texas Western Swing Hall of Fame Inductee, 2-time AWA Western Swing Female Vocalist

Click the link below to see Kristyn Harris sing “America the Beautiful”.

This popular Bishop Mule Days event will sell out quickly!

Widely known for his enduring 1975 crossover hit “Wildfire” Michael Martin Murphey will headline the Mule Days “Back to our Western Roots” Concert on Thursday, May 25, 2017.  Concert goers will appreciate Murphey’s unique ability to set the poetry of the American West and American cowboy to music with songs like the hauntingly beautiful “Mountain Storm” and the lively “Shake It Off”.

Jennings Brown of Cowboys & Indians says, “Few people are dedicated to preserving the heritage and beauty of the American West quite like cowboy singer-songwriter Michael Martin Murphey. Through his music he tells the stories and romance of the Native Americans, cowboys, horsemen, ranchers, outlaws, and lawmen.”

Tickets for the Thursday May 25, 2017, Michael Martin Murphey concert are $60 for VIP reserved seating with the hors d’oeuvre Meet & Greet and $40 for general admission reserved seating.

Do not miss the chance to see this Grammy-winning performer and one of the best song writers in the country.

The concert is expected to sell out early.

Not only is Frankie “Punkintown” Smith the Bishop Mule Days clown who entertains the audience with his trick pony, clogging mule and dog “Little Bit”, he also is a stand-up comedian and Pastor. Who knew? “Punkintown” will bring his antics to the Main Arena throughout the Memorial Day Weekend and give a heartfelt sermon on Sunday morning.

“Punkintown” says “Entertainment! It is not what I do. It is who I am. It is awesome to wake up every morning and love your job, or at least that’s what some people call it. I say it is great to get up every day and be myself. I don’t have to hide behind makeup and put on an act, I just get to be me.”

Want to see “Punkintown” as a clown or Pastor? Purchase Mule Show seating to see him clownin’ around in all five shows in the Main Arena or join us for Cowboy Church. You will not be disappointed with his high energy show in the arena and his passion for the Lord on Sunday morning!

Experience the Legacy of the West

Making his first appearance at Bishop Mule Days Celebration is Bobby Kerr and his unique team of American Mustangs who have inspired audiences around the nation with their incredible display of courage and trust. Bobby presents his American Mustangs to audiences of over 200,000 annually and gains standing applause at various events including PRCA Rodeos, FEI World Cup Finals, Del Mar Night of the Horse and the California State Fair.

Witness relationships that have formed between Bobby and his wild Mustangs which once roamed the desert landscape and be inspired by the partnerships that were once thought impossible. Bobby uses various props to demonstrate the horses’ athleticism and trust, including an antique pick-up truck, swinging bridge, giant teeter-totter and remote control calf. New for 2016 was the addition of Bobby’s dog, Bert, who helps demonstrate the capabilities of these great horses along with the bond of a man and his dog.

Also an avid poet, Bobby enthralls his audience with his true-to-life poems about his horses and the Western Heritage he loves.

Bobby has been competing at various Mustang Makeover competitions and is continually striving to expand his team of American Mustangs, while inspiring fans and preserving American History.

Mustang Millionaire which airs on Nat Geo Wild features Bobby as a cast member and he was also a guest on Good Morning America promoting the series. He has been featured in Western Horseman Magazine and has contributed several articles and is often interviewed on radio and horsemanship podcasts.

Click the link below to see Bobby Kerr and his American Mustangs in action!

One of the Eastern Sierra’s favorite local dance bands.

Halfway to Benton is an ensemble of musicians bringing you the best country and rock music of the Classic Vinyl era,

“Halfway to Benton is a state of mind… The band is all about having fun…dancing, singing, playing and otherwise “carry’in on”. So now, please kick up your boots and enjoy some music dancing to the sounds of Halfway to Benton.

Tickets for the Friday, May 26, 2017 Mule Days BBQ which features

Halfway to Benton are $25 and can be purchased at www.muledays.org or by calling the

The JD Priest Band returns in 2017 to rock the house once again at the Saturday Night Dance. The filled to capacity Charles Brown Auditorium in 2015 was vibrating with a combination of Rockin’, Countrified, Bluesy-Americana that was every bit as contemporary as it was traditional.

In the mid-90’s, after serving in the United States Air Force, JD Priest’s musical career began with the Americana-Country group Acoustic Connection. This is where he made his national television debut on TNN with Charlie Daniels on the Talent Roundup. He has also been voted Southern California’s Best Band in 2013 by Inland Empire Magazine and hailed as Best Out Of Town Band at Cochella Valley’s Inaugural Awards Spotlight. He has also played The Temecula Balloon and Wine Festival in Southern California and The Pioneer / Frontier Days in Prescott Arizona. The career highlight he is most proud of is performing for the Wounded Warriors returning home from Iraq & Afghanistan.

Click the link below to hear JD Priest on stage.

Mule Days is always proud to showcase the 20 Mule Team every Memorial Day Weekend, and 2017 is definitely no exception.

The 20 Mule Team was specially invited by Brad Ratliff, 2017 Tournament of Roses Parade President, to participate in the 128th Rose Parade.  Following family tradition, Mr. Ratliff rode in the historic replica wagons just as his father did for the 110th Rose Parade in 1999.

The 2017 Rose Parade was the debut for the full scale, authentic working replica set of the 20 Mule Team wagons, honoring the original 1880’s wagons from Harmony Borax Works in Death Valley National Park. Commissioned by the Death Valley Conservancy, the wagons were under construction for almost two years at Engle’s Coach Shop in Joliet, Montana to ensure their authenticity and capability. These wagons are the only full size and functional of their kind in the world! Presently, the Death Valley Conservancy is fundraising to construct the water wagon, the final wagon to complete the replica project.

The Laws Railroad Museum located in Bishop, California plans to design and build an extension to the existing wagon barn to house and display the 20 Mule Team wagons. The framework for the barn will be built using posts and beams from an original narrow gauge railroad bridge that spanned the Owens River near Independence, California.

Bishop’s own 20 Mule Team, driven by Bobby Tanner, is a sight to see. This team of mules and teamster display incredible athleticism and skill in the Mule Days arena and Saturday Parade. Don’t miss the chance to Meet & Greet the mules and teamsters at the end of the Sunday afternoon show.

Click the link below to see the 20 Mule Team and the historic replica wagons prepare for the 2017 Rose Parade.

Information
Protecting the health of your animals at the Bishop Mule Days Celebration is of the utmost importance to all.
Kids! Want to learn the art of packin’ mules?