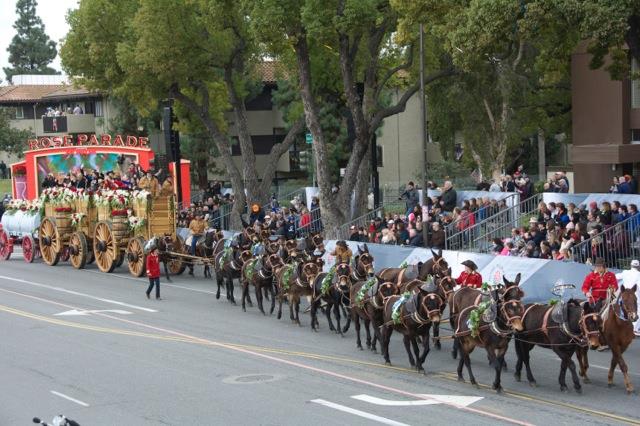 Before there were long-haul truckers or cargo planes, long hitches of mules were the original freight-haulers in the American west. The famous Death Valley 20 Mule Team became an icon of American industry as long hitches of mules hauled borax across the Mojave desert. At the Bishop Mule Days Celebration, this almost magical piece of history comes to life with the modern 20 Mule Team display.

Yes, there really are 20 mules that pull two beautiful borax wagons, which are the only operable set of Death Valley borax wagons known in existence. These wagons were completed in 2016 after nearly ten years of extensive research and fundraising by the Death Valley Conservancy, Rio Tinto Borates, and teamster Bobby Tanner. The wagons are massive, and serve as an outstanding example of the wagons that were once used in Death Valley.

A few mere days after the new wagons arrived in Bishop, the team traveled to Pasadena to appear in the 2017 Tournament of Roses parade. Later that year, the team traveled across the country to be part of the 4th of July parade in Washington DC. This was a truly historic moment for the team, as the original 20 Mule Team, which was used to market Borax soap, was part of the 1917 Rose Parade as well as the 1917 inaugural parade for President Woodrow Willson. One hundred years after the original team visited Washington, the bells of the 20 Mule Team were heard in the capital city once again.

Tanner and his mules have long been a special part of the Bishop Mule Days Celebration. In 1969, Tanner’s father, Bob, was one of the original founders of the event. While Bob has since ridden into the great beyond, his family has kept his legacy alive and thriving, especially at Mule Days. The Tanner family owns and operates Reds Meadow Pack Station in Mammoth Lakes, and has been providing the mule-power for the 20 Mule Team display since the 1990s.

These remarkable long-eared celebrities can handle the chaos of Washington DC with as much ease as they traverse the Eastern Sierra wilderness. They’re hard-working critters who love what they do and do it with plenty of spunk and spirit.

One of the highlights of seeing the 20 Mule Team in action is getting to see the team up-close and personal. The team will be part of the Mule Days parade at 10 a.m. Saturday, May 26 on Main Street in Bishop, but it also will be in the Sunday afternoon show on Sunday, May 27. After the show, the audience is invited to come into the arena to meet the mules and their two-legged companions in person.

For more information or to purchase tickets for the Sunday afternoon show, call the Mule Days office at (760) 872-4263, or visit muledays.org.

To learn more about Reds Meadow Pack Station – and to see pictures that will definitely inspire that next impromptu vacation to the high sierra – visit redsmeadow.com.

For the history lovers who want to learn more about Death Valley, visit the Death Valley Conservancy’s website at dvconservancy.org.