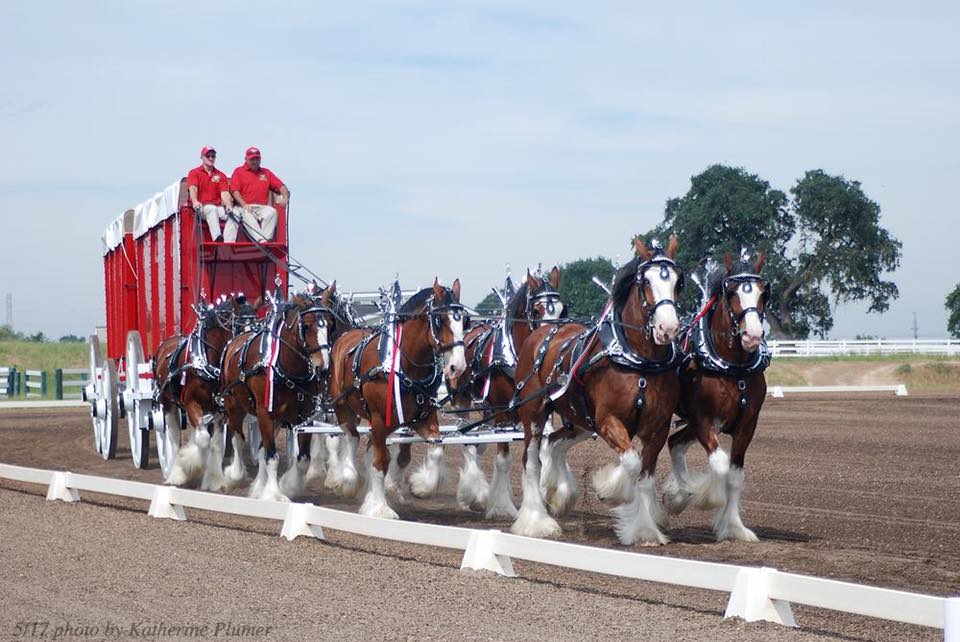 There are hardly words to describe the sweet disposition and beauty of America’s draft horse – the Clydesdale. For a horse that can reach six feet in height, they are remarkably gentle. Perhaps it is this loving disposition that leaves such a deep impression on the hearts of those privileged to witness these horses in action. Perhaps it is the horses’ grace and the striking beauty of their plume-covered hooves. Regardless of the reason, experiencing a Clydesdale team should be on everyone’s “don’t miss” list – and this year, the Cal Crush Clydesdale team is coming to the Bishop Mule Days Celebration.

Charlie Evans, who is the driver for the team, said he wouldn’t trade working with the Clydesdales for anything.

“They’re just the best breed of horse that ever was,” Evans said. “They’re like 2,000 pound puppy dogs.”

Last year, Cal Crush welcomed a two-wagon train of copper milling wagons to its fleet. These beautiful red wagons are pulled by a team of eight Clydesdales. The milling wagons, as well as a traditional freight wagon, will all be part of the Cal Crush display during Mule Days.

The Clydesdale, as a breed, was originally from Scotland. These gentle giants were used primarily in agriculture, but were also used for pulling wagons and carriages. The average Clydesdale weighs between 1,600 and 2,400 pounds. Because of the Clydesdale’s ability to pull several times its body weight, the breed was often used for pulling heavy freight wagons in cities.

One of the breed’s most striking characteristics is the plumes of hair surrounding its massive hooves. A Clydesdale’s horseshoe is the size of a dinner plate and weighs five pounds.

Clydesdales are on the “watch” list for species vulnerable to extinction, but the Cal Crush Clydesdale team remains a celebration of the Clydesdale legacy and the contribution draft horses made to building America. The breed survived, and became America’s draft horse because of the influence of the famous Budweiser Clydesdales. Evans said he has nothing but praise for the tremendous effort made by Budweiser to preserve and promote the Clydesdale. The good folks at Budweiser also helped the Cal Crush team get started.

“The help they gave us was incredible,” he added. “They’re just the most wonderful people.”

Evans’ own journey as a horseman is an inspiring story. He did not grow up with equines, preferring dirt bikes. But that changed in 2009, when he began his journey with his first Clydesdale horse. He fell in love with the breed and was determined to learn horsemanship. This first horse was soon joined by a second, and like so many others who have fallen in love with equines, the rest is history. He said learning to drive a team of four horses was extremely challenging, but he continued trying until he mastered the art. After that, adding two or even four more animals to his hitch came more easily.

Cal Crush is on a mission to become California’s best portable rock crushing company. It was started in 2000 by Charlie and his brother, Brian. Their vision, along with strong business and personal ethics, and unparalleled customer service, have helped Cal Crush’s customers to count the company among Nation’s top construction, aggregate, and construction recycling companies.

The Cal Crush Clydesdales will be pulling the two copper milling wagons down Main Street for the Mule Days Parade on Saturday, May 26. The team also will be pulling its red freight wagon in the arena shows. The sweet personalities of the horses and the uniqueness of this display are sure to win the hearts of every equine enthusiast. To see more of these incredible creatures, visit the Cal Crush Clydesdales Facebook page, https://www.facebook.com/calcrushclydes/.